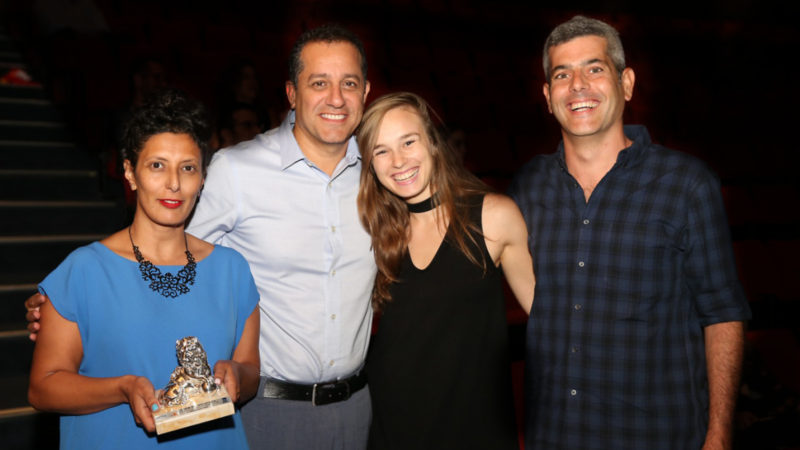 The Israel Public Relations Association, with the participation of leading figures in Israel’s public relations community, awarded the 2018 “Roaring Lion Award” in the international campaign category to the Debby Group for managing the campaign that marked the 30th anniversary of the March of the Living.

For the last few years, the Debby Group has enjoyed the privilege and the exciting and complex opportunity to be a key partner in the March of the Living, from the planning and steering stages to the opening of the March of the Living on Holocaust Memorial Day. I’m grateful to Chairman Baruch Adler, Vice Chairman Shmuel Rozenman and the March of the Living’s global team for entrusting us with this project. With incredible insight and immense sensitivity, these visionaries continue to combat anti-Semitism and racism and foster a better future through an international educational program that perpetuates memories of the past while focusing on the future.

This year’s March marked 30 years since the first March of the Living and coincided with the celebration of 70 years since the establishment of the State of Israel. The juxtaposition of these two highly meaningful events underscores the essential role of the program is not only teaching and perpetuating the memory of the Holocaust but also in instilling tolerance, dedication and kindness in the next generation. This tribute to the great importance of the work of the March of the Living was the guiding message at this year’s “Roaring Lion” award ceremony.

The March of the Living is an international educational program striving to teach the next generation the history and universal lessons of the Holocaust. Since the first March in 1988, more than 300,000 participants from 52 countries have marched from Auschwitz to Birkenau.

The media task for this event is positioning the March of the Living as an inseparable part of Holocaust Memorial Day, and demonstrating its current relevance for the Israeli public and for other audiences. Every year, media companies face the same challenge of relaying the March’s valuable and timeless message by telling its story from an innovative, contemporary angle which can help maintain the March’s relevance for Israeli and other audiences.

This task is compounded by two additional challenges. The first is harnessing the huge potential for major exposure through new digital platforms such as social networks and the increasingly popular mediums of video content and live streaming. The other challenge is the necessity of responding to current events in real time. The controversy a few weeks before the last March of the living regarding a new Holocaust bill that had been enacted in Poland is an example of current news that was related to the context of the March, but not directly to the program itself.

Our campaign recruited opinion leaders and public figures from around the world to participate in the March and convey its important message. Special press delegations, including correspondents from all leading media platforms, were also invited to participate.

The March of the Living 2018 had the greatest number of participants ever, and media exposure eclipsed all past media activity. More than 12,000 youth from 110 delegations and 41 different countries across the globe participated in the March. Leading the March was Israeli President Reuven Rivlin, who was accompanied by senior officials from each of Israel’s security forces. They were joined by Polish President Andrzej Duda, Israel’s former Chief Rabbi, Rabbi Israel Lau, Israeli musician Shlomo Artzi and other dignitaries.

The largest delegation of journalists ever to cover the March included 26 journalists and cameramen from Israel’s major media outlets and ten leading representatives from the Israel desks of international media and news agencies. On Holocaust Memorial Day, news crews from every local TV channel ran special shows and live broadcasts of the March.

The March was broadcast via live streaming on all online news sources and media social networks.

Hundreds of different news items were circulated on international media. Social networks accelerated exposure and processed innumerable shares and comments, with hundreds of thousands of people viewing some articles.